The club school link between Clonoe O’Rahilly’s and St Patricks Annaghmore Primary School was revived in 2015 when Ulster GAA provided some funding for the club to send in coaching support for six week block. The club seeing the positive result of this in terms of increased numbers at training decided to fund a club senior player to coach two hours per week in the school as well as a larger sum to help with transport cost to local tournaments. Since then the link has become very strong, it allowed the school to successfully apply and win the Irish News coaching day via St Marys college Belfast. The coaching day took place at the O’Rahilly Park on Friday 2nd June, to ensure that the entire school was able to attend the club pulled together to recruit additional volunteer club coaches on the day to help coach the 240 pupils. The next day the clubs u12 boys team competed at the Newry Mitchels tournament were 46 teams and 850 players from across Ireland competed, the Clonoe team showed great character and skill to win the tournament. 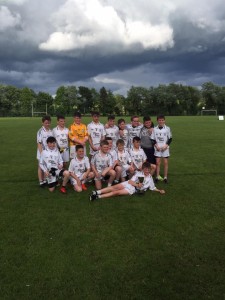